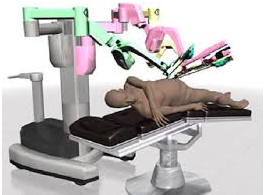 ROBOTIC TECHNOLOGY AND ITS USAGE AT PRESENT

Robotic surgery brings the power of computers to the finger tips of the surgeon. The robotic system consists of a console and patient-side cart. It is a sophisticated, but expensive tool controlled by a surgeon. The surgical console has a built-in, three-dimensional vision on a real-time image screen where the surgeon views the target area in high definition and 10X magnification. The robotic instruments which work on the human tissues are attached to the robotic arms and are very fine and precise.

The entire system uses a mechanical robotic pulley system and software algorithms to synchronise different functions. Within the console, the surgeon has foot and hand controls to facilitate different movements and use energy sources as needed during surgery. One or two assistant surgeons work at the patient-side providing assistance. The major specialities practicing robot-assisted surgery are urology (60-70 per cent of overall robotic procedures), gynaecology (most of the procedures can be done with the help of robot), ENT and general surgery (vast majority of abdominal surgical procedures are being done with the assistance of robot). In the field of cardiac surgery, selected coronary artery surgery and mitral valve reconstruction can be done with the help of the robot-assisted approach. 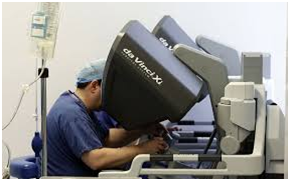 The fundamental premise of robotic surgery is that any technology which assists a surgeon to operate with precision will result in better outcomes for the patient. This year marks the tenth year anniversary of the world’s first robotic programme to treat prostate cancer started at the Vattikuti Urology Institute, Henry Ford Hospital, and Detroit, US. Within this short time, the unprecedented growth of robotic surgery for prostate cancer surgery has seen it replace both open and conventional keyhole surgery as the surgical treatment of choice for prostate cancer in the US. Most of us believe that robotic surgery is the way surgery will be done in the future. It is truly a demand-driven revolution. Patients see the benefit in this kind of surgery and ask for it.

Back in 2000, there were only 1,000 robotic surgeries world-wide. That number surged to 360,000 in 2011 and 450,000 last year. Boosters say the practice is on the rise because of its strong benefits. For the patient, there’s usually less blood loss, a shorter hospital stay and less reliance on postoperative pain medication. There’s also the cosmetic benefit of no big scars: As in laparoscopic surgery, the instruments enter the body through small incisions.

For surgeons, the procedures can be less tiring. They don’t have to bend over an operating table—they can sit in front of a screen with a magnified, full-color 3-D view of the surgical field. For maneuvering in very tight spaces, like the back of the throat, the enhanced screen image makes it much easier to see. But some doctors say robotics is catching on not just because of its merits. Robotic surgery can mean a shorter hospital stay for patients, but reports of adverse events to the FDA are on the rise. Some doctors also say there’s an arms race by hospitals eager to attract new patients and get a competitive edge. Highway billboards and websites sometimes suggest robots improve cancer outcomes, a claim that many doctors say isn’t backed up by studies.

Government officials have shown concern about oversight as well. For example, responding to an increasing number of reports of patient complications from robotic surgery, Massachusetts health officials last March sent an advisory to the state’s hospitals urging caution: “As with any new technology, care should be taken that protocols are in place to ensure appropriate patient selection and the full explanation of risks and benefits for all surgical options.”

Surgeon believes that overall, robotic surgery is safe. But, they say, problems can get magnified if a surgeon doesn’t have advanced laparoscopic surgical skills to begin with and doesn’t have full command of the device. That means it’s easier to cause inadvertent injury. Training protocols vary by hospital. There’s no magic number of supervised procedures that must be performed before a surgeon is deemed ready. Obviously, ask your surgeon how experienced he or she is in the procedure and whether there have ever been any complications. Good question for the hospital, too.

2015-07-30
Administrator
Previous: ROBOTICS IN INDIA
Next: PROS OF ROBOTIC SURGERY