A varicocele is a collection of varicose veins surrounding a testicle

Affects up to 15% of males, almost exclusively on the left hand side due to the fact that the left testicular vein empties vertically into the renal vein. The varicosities form when the valve system between these two veins fails, so that blood falls backwards under the pull of gravity. Often symptomless but can cause an aching discomfort. Linked with 30 – 40% of cases of male infertility as a varicocele can trigger a fall in sperm count through keeping hot blood pooled within the scrotum rather than draining it away.

Can be surgically excised.

Currently first line management is venous angiography and embolization of the varicocele. This can be done as day care procedure. Complications and recurrence rates are minimal.

Note: At Apollo hospitals, Dr. K. Ramesh uses use microscope for ligation of varicose veins which considered as gold standard in treatment of varicocele.

Erectile dysfunction (ED) is the inability of a man to achieve or maintain an erection sufficient for his sexual needs or the needs of his partner. Most men experience this at some point in their lives, usually by age 40. Erectile dysfunction tends to be more common and severe with age.

The first line treatment for erectile dysfunction is oral medication with a phosphodiesterase 5 inhibitor such as Sildenifil (Viagra), Vardenifil (Levitra) or Tadalafil (Cialis). This medication is taken only as and when necessary and is effective in about 80% of patients. They vary slightly in terms of mechanism of action, time of onset, duration of action and side-effects.

The second line treatment for erectile dysfunction (not responsive to oral medication) is injection therapy. Using a thin syringe and a very tiny needle, a drug called prostaglandin E1 is injected into the shaft of the penis. It may cause a slight pain at the point of injection. Within 10 to 15 minutes, the penis will become erect.

The third line treatment involves implanting a synthetic mechanical device into the spongy tissue of the penis.

In the no-scalpel vasectomy, no surgical knife is used. Instead, a mini-clamp is used to hold the vas deferens while a puncture incision (instead of a cut) is made with special forceps. The puncture incision does not require suturing.

At the end of surgery, the puncture wound is hardly noticeable. There is no need to remove any sutures. There is minimal postoperative discomfort. Risk of bleeding and infection is very low. Vasectomy does not increase the risk of prostate cancer. It does not affect erection, sexual desire or the ability to ejaculate.

Three months after vasectomy, a seminal analysis is done to confirm the absence of sperms. Meanwhile other forms of contraception such as condoms must be used.

During circumcision, the loose sleeve of foreskin which rolls over the glans is surgically excised

The term Vasectomy Reversal (vasovasostomy) is the process of reconnecting the tubes (vas deferens ) that were cut during a vasectomy Between 4 and 6% of vasectomized men consider a vasectomy reversal. Approximately 60% of men consider vasectomy reversal because of remarriage. There are many other reasons that include family planning and the desire to maintain fertility for the future

Return of sperm to the ejaculate ranges from roughly 30 to 90 percent, and may depend greatly on the length of time from the vasectomy. Generally, the shorter the interval, the higher the chance of success. The likelihood of pregnancy is somewhat lower (30 to 60 percent), and can depend on female partner factors.

In most cases the vas deferens can be reattached but, in many cases, fertility is not achieved. There are several reasons for this, including blockages in the vas deferens, and the presence of autoantibodies which disrupt normal sperm activity. If blockage at the level of the epididymis is suspected, a vaso-epidymostomy (connecting the vas to the epididymis) can be performed.

There are facilities available at Apollo hospitals Chennai to perform this surgery.

What is required for a successful vasectomy reversal?

The patient must have sperm available to pass through at least one reconnection. The second condition is that each reconnection must be as watertight as possible.

Most urologists specializing in the field of male infertility perform vasovasostomies using an operative microscope for magnification, under general or regional anesthesia. 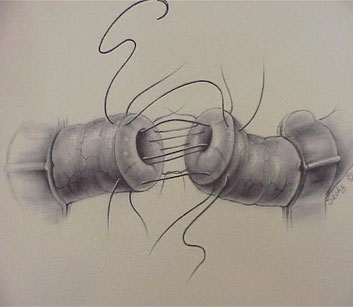 Vasoepididymostomy (VE) is often considered one of the most technically challenging operations in the field of urology. The procedure requires anastomosis of a single epididymal tubule (luminal diameter .15-.25 mm) to the lumen of the vas deferens (diameter .3-.4 mm), and is reserved for patients with congenital or acquired epididymal obstruction, or patients who have failed previous attempts at surgical reconstruction of the vas deferens. This surgery attaches the vas deferens directly to the epididymis, the coiled tube on the back of each testicle where sperm matures.

The rate of pregnancy depends on such factors as the method used for the vasectomy and the length of time that has passed since the vasectomy was performed. The reversal procedures are frequently impermanent, with occlusion of the vas recurring two or more years after the operation.